Make Architects explains the material selections and design approach to its refurbishment of the London megastore’s famed circulation space, which dates from 1939.

The concept for the renovation takes it inspiration from the Harrods archives. Make worked closely alongside conservation specialist Hilary Bell and Kensington & Chelsea Council to ensure the scheme both preserved the heritage architecture and celebrated the original Art Deco escalator hall. 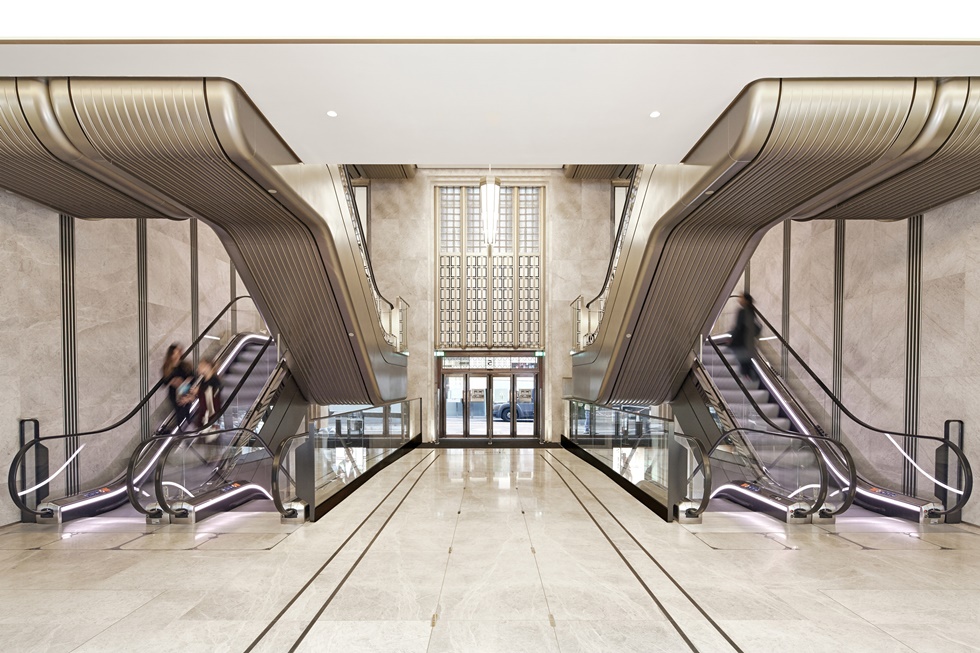 The principal materials of metal and glass have been drawn from the original palette, with each material behaving in a consistent, coherent manner in response to its own characteristics and that of the historic design. Modern interpretations concentrate on the themes of permanence, longevity and elegance. Internally, layers of post-1930s refurbishments have been stripped away to reveal original features. Specialists had the task of carefully restoring the original metalwork, glasswork and lighting, and also reinstate elements which were lost or damaged during the Second World War.

Work started in late January 2016 after planning and listed building consent had been granted in October 2015. There were just 40 weeks for the project team to complete the scheme before the Christmas period arrived. It was paramount that the programme kept to this strict schedule and that the rest of the store remained operational.

Navigation and wayfinding were key drivers in the hall’s spatial replanning, and this required early structural alteration works. Thirty tonnes of steelwork was brought to site, and 28 piles were dug  28m deep to strengthen foundations. The architectural finishes then took shape. Immense planning and coordination were necessary for the momentous task of installing 16 brand new nickel bronze-clad escalators. They were delivered in sequence through the entrance doors, lifted through the air and into position. The ‘floating’ escalator above the ground floor is supported by hidden columns, creating a triple-height space.

The light wells on the upper landings take inspiration from the 1930s detailing. For the first time, customers are able to see all the way to the pinnacle of the hall, where a new glass dome with its interlacing pattern and polished finishes brings in natural light and crowns the new grand entrance hall.

Kitchen trends to suit every style