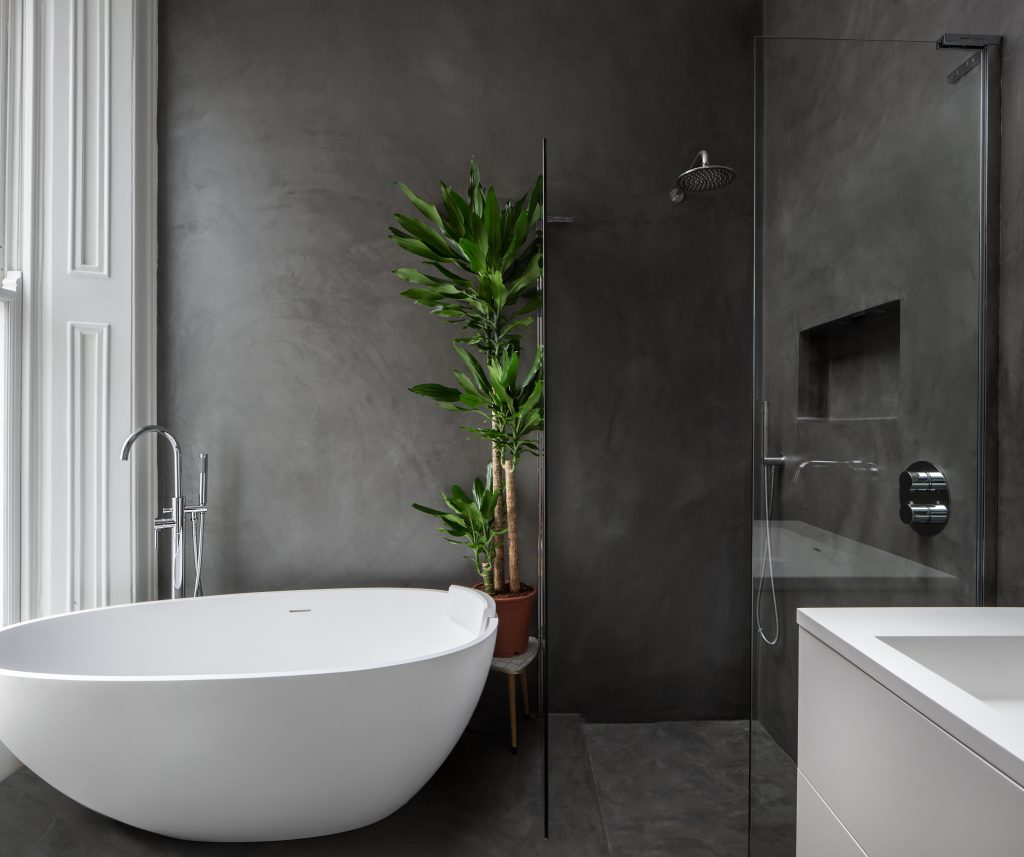 Marloes Road, has been transformed from being tired, gloomy and impractical to a light, airy and welcoming home for a professional couple. The space has been maximised and through floor design tweaks the property now boasts an additional bathroom and a study.

The project was the vision of Julian Prieto, founder and head designer of MyEdge2.com, who worked closely with the clients to create a contemporary space to compliment both their personal and professional lives. Key was enhancing the building’s 19th Century heritage.

The initial layout was passé and, in parts, counter-intuitive. For example, the positioning an upstairs bathroom allowed for a clear line of site from the landing and awkward access to the master bedroom.

Equally, on the ground floor, the separation of rooms was distinctly old-fashioned with a poky kitchen and partially separated dining and drawing rooms which limited daylight.

The client’s top consideration was making the space more usable and improving the “flow”. The pared-back colour scheme, focus on enhancing daylight levels and restricted material palette were key. One of the most significant changes was moving the kitchen from the rear of the apartment, transforming the spacious but under-used double drawing room into a modern kitchen-diner and living area.  The ‘old’ kitchen is now a study. 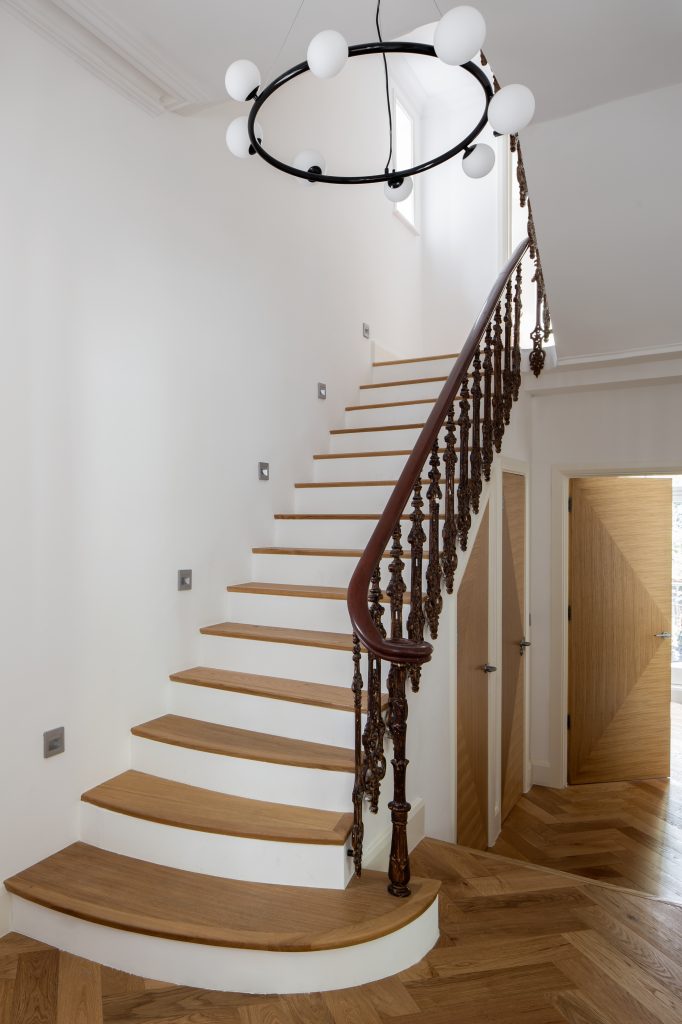 ures have been maintained throughout, the finely detailed Victorian fireplaces remain a key feature and the stunning parquet floors were re-laid. Contemporary details have also been included to tie the scheme together including a multi-functional kitchen island in polished granite, and engineered wood cabinetry.

Responding to a request from the client to create a greater amount of storage space in the kitchen, the design incorporated floor to ceiling cupboards. A flush fit was achieved by relevelling both the floor and the ceiling.

The kitchen flows seamlessly into the living room space which is versatile. Dramatic double height and width doors provide an imposing entrance to the open plan living room and kitchen.

By moving the kitchen this organically created another room, which the couple could use as a home office, immediately increasing the property value by £60,000. Combined with the other renovation work the couple has increased the value of the apartment by over £400,000 in total.

Whilst much of the property would be inspired by Scandinavian design, the scheme does incorporate some striking pops of colour. Focusing on the bathroom, these rooms serve as captivating visual statements, breaking up the otherwise ultra-refined decor.

Working closely with the client, Julian introduced the growing trend for uber-chic dyed concrete, eschewing pastels which would have been washed out by the rest of the property’s palette. He focused instead on darker, moody tones to create intense bathrooms with a unique atmosphere, evoking the vivid works of Mark Rothko and Yves Klein. 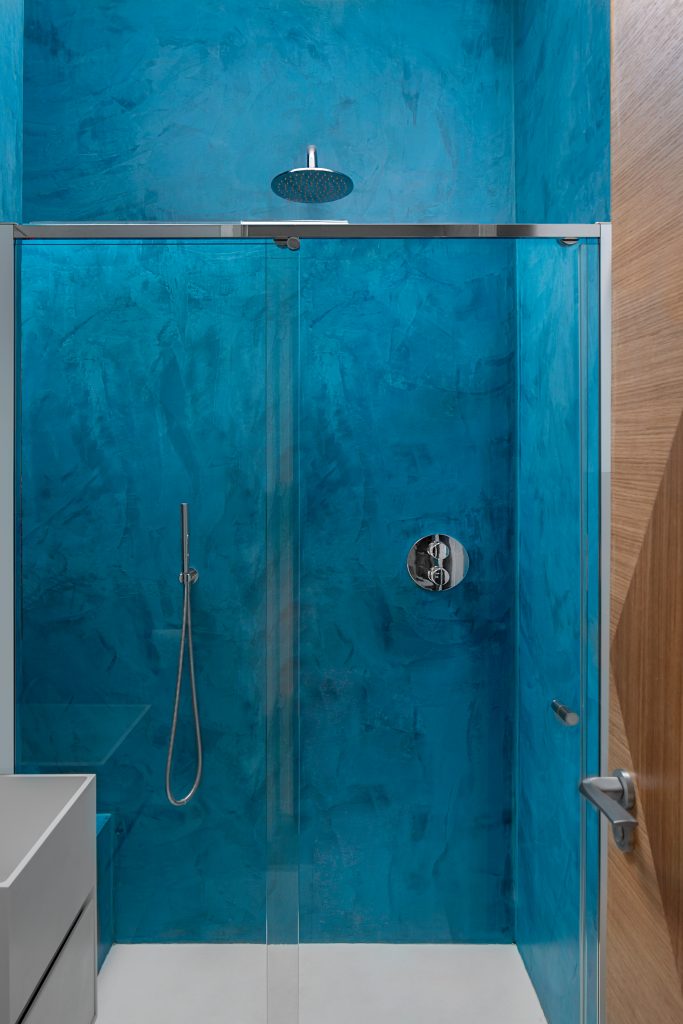 Structurally, he also addressed the inconvenient positioning of the en-suite door in the master bedroom. It was moved by 90 degrees making its only access from within the bedroom, adding a welcome degree of privacy.

The downstairs loo boasts a very different aesthetic, drawing on the clients personal passion for the Italian Renaissance. Visually it is an eclectic room, oozing personality and breaks away from the otherwise largely neutral downstairs space. A monochrome tiled floor and a striking sink real clamshell skin sits on a beautifully opulent Doric column pedestal, creating an artisan inspired aesthetic which is almost dreamlike as it is so far removed from the surrounding décor. A local artist is soon to create a Rococo mural.

Let there be light

The design has focused on bringing a much light as possible into the triple-aspect property. The internal doors are double height, encouraging natural light to flood the property. The opening between the kitchen and the living room was widened significantly, using an RSJ for structural integrity. 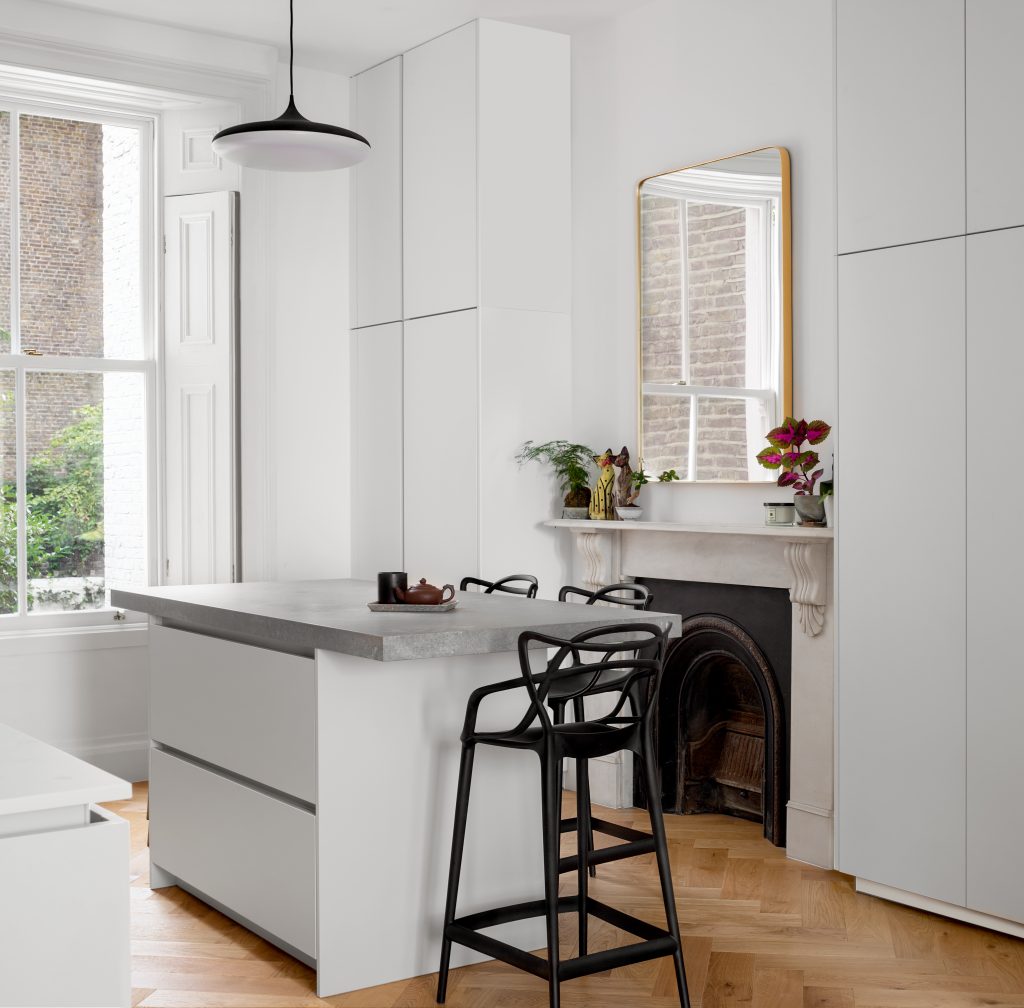 Previously the space was gloomy, and claustrophobic.

In addition to the heavily stylised downstairs lavatory, the bedrooms demonstrate a design juxtaposition within the property. It is in these private spaces where the individual personalities of the client’s exudes. The master bedroom is drenched in beautifully rustic antique elegance, while the guest bedroom showcases their adoration of immaculate and ultra-minimalist Japanese interior design.

Throughout the project, Julian sought to incorporate bespoke elements to the interiors of Marloes Road. The need to replace the old staircases and the new double heights of the door frames presented the perfect opportunity to showcase his passion and admiration for the master artisan. 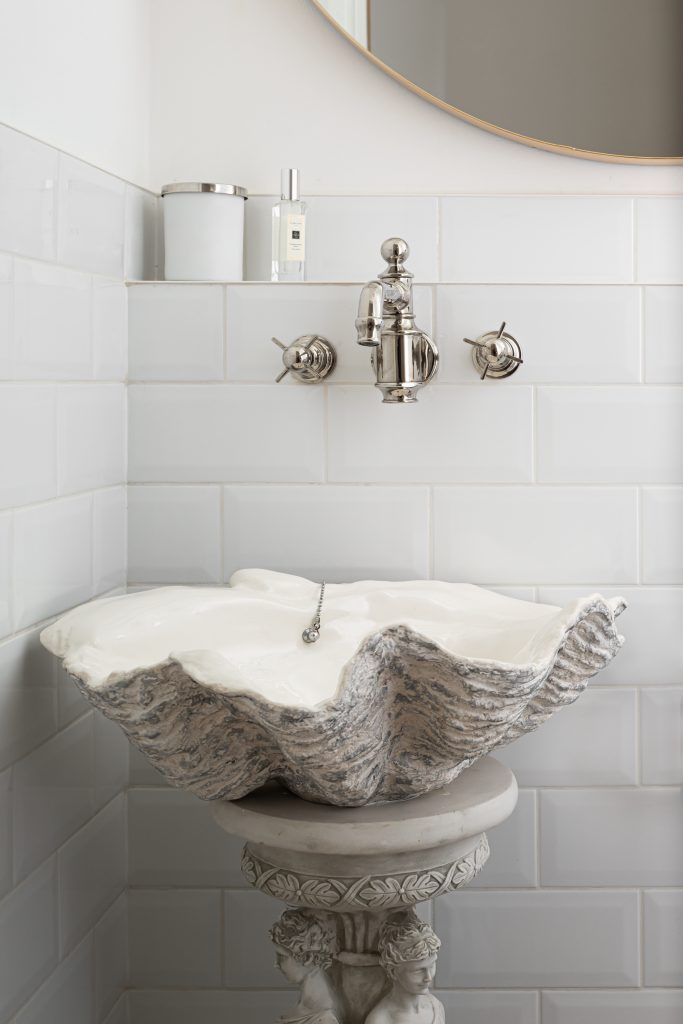 The doors were bespoke manufactured in MyEdge2.com it their North London workshop. Hand-crafted, with American Oak veneers they were specifically designed to be double height (2.6 mtrs) and incorporated both oblique and parallel lines to create an interesting geometric pattern. This added another, subtle point of visual interest to the interiors.

The steps of the staircase required a high degree of precision, laser cut to the exact millimetre so each would slot perfectly into position. Complemented by the original, intricately wrought iron banisters, it perfectly juxtaposed the old and the new, simultaneously referencing the timeless appeal of skilled craftsmanship.