SSE Hornsea Ltd, operators of a natural gas storage facility near Atwick on the East Yorkshire coast, has been sentenced today after 13 employees and contractors were exposed to asbestos fibres. 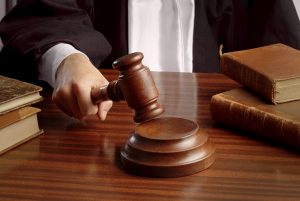 a judge hand striking a gavel over a table

Beverley Magistrates’ Court heard that a team of three mechanical maintenance personnel were tasked with the removal of a non-return valve from a compressed air distribution system. Some of the sealing gasket material was difficult to remove so they used a wire brush mounted on an electric drill to remove the gasket material which spread fibres from the gasket around the maintenance workshop onto floors, work benches and clothing.

Two days later another employee of SSE Hornsea Ltd became suspicious of the fibrous dust, and having reported his concerns, arranged for a sample of the dust to be tested. It was found to contain chrysotile (white) asbestos fibres. The maintenance workshop was later closed to prevent access by employees and contractors.

The Health and Safety Executive (HSE) prosecuting told the court that the company had failed to identify in the risk assessment for this job that there were asbestos gaskets attached to the non-return valve. HSE also told the court that records held on site, which could have helped identify the presence of asbestos, were not adequate and that the maintenance team leader involved in this task had not undertaken asbestos awareness training.

Speaking after the hearing, HSE Inspector Paul Miller said: “In this case SSE Hornsea Ltd substantially failed to manage the risks associated with asbestos found within their process plant and have needlessly risked the future health of 13 people. Employers should ensure that they have in place adequate arrangements for both the identification and management of asbestos which may be found in buildings or process plant.”

“Asbestos is a naturally occurring mineral fibre which was widely used in both building and engineering materials for its strength, heat and chemical resistance.  This can cause serious diseases including mesothelioma, lung cancer and asbestosis which are often fatal.  These diseases do not have an immediate effect, they often take a long time to develop, but once diagnosed, it is often too late to do anything. HSE’s Go Home Healthy campaign aims to prevent work-related lung disease by ensuring employers and workers have the information they need to work right.