“Building sites can be a tough environment for any printer. It needs to be able to cope with anything, from dust and mud clogging up its insides to rough-handling by a constant stream of users and being moved from site to site” says Kit Lock, IT technician at award-winning construction company SDC.

However, this wasn’t the reason the Bedford-based organisation made the decision to replace its site printers. SDC’s existing OKI models handled the wear and tear, and seemed to thrive on it. “They were at least six or seven years old. We admired their durability and the fact that they just kept going,” says Lock.

SDC works across a variety of sectors including research and development, commercial, manufacturing, automotive, healthcare and education. As a result, it often has around 20 to 30 concurrent live projects on the go – each with their own temporary site manager’s office.

“So our main challenge was space. We had a selection of devices in each of our site offices including A4 mono, A3 colour printers for the many drawings needed for each project, day-to-day office printing and a separate photocopier causing space restrictions in an already limited workplace,” Lock continues.

“These printers came from several different vendors and we had the issue of installing different printers for multiple users as they arrived on site. This was a constant demand on the IT department.”

Although SDC’s existing OKI printers were still in good shape, they were older models that didn’t have photocopying capability. The company hire division had a number of photocopiers, which were aging and proving an expensive option. Every time a project finished, these photocopiers had to be moved. As there were various types, all set up in different ways and they were sometimes large and heavy, SDC had to get the supplier to pick them up, move them to the next site and set them up again.

Lock decided that the answer was to standardise on devices from a single vendor. Because the OKI printers had proved robust and reliable, OKI seemed the obvious choice. Working with OKI partner Abacus Leewell and with OKI itself, it decided to evaluate an OKI MC853DNCT A3/A4 colour multifunction printer (MFP) and check it could cope with the rugged setting and all the different tasks it had to perform. 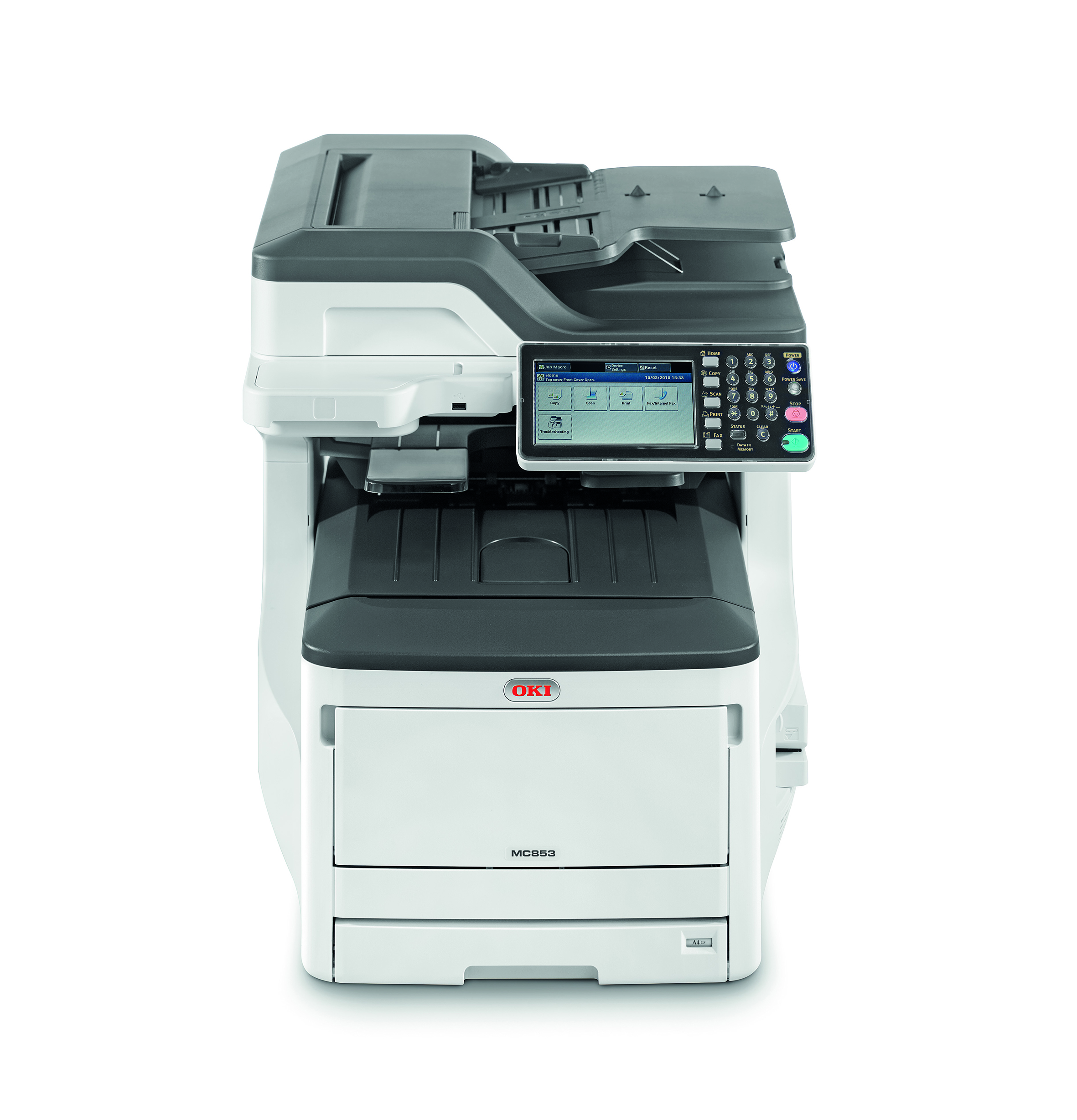 MC853: A compact, powerful A3 colour multifunction printer offering excellent print quality and copy functionality, the MC853 is ideal for small workgroups. Easy to use with a customisable interface, it combines low total cost of ownership with the functionality of higher-priced devices.

The OKI Smart MFP passed the test with flying colours and an order for several new Smart MC853DNCT MFP’s followed. “The reason for going for that specific device was to have all the functionality in one place – it can print, scan, fax and photocopy. It is very compact so it just sits in the corner and doesn’t take up any desk space,” says Lock.

“We also wanted a machine that could replicate the finer details on drawings but – at the other end of the spectrum – quickly print out a big Wet Paint sign. We need these quickly because we are working with the public much of the time. They have to be good quality so people can read them,” he continues.

“We also needed it to be a typical office printer for the usual Word documents such as policies and health and safety forms. Now these MFPs do it all.”

Lock adds that despite the versatility of the MFPs, they are easy to use. “When someone needs to print their time sheet and copy drawings, they don’t want to create lots of settings, they just want to print it out straightaway.”

So the OKI devices now combine all the functionality needed in one compact device, but what other benefits have been noted? “Definitely cost savings. We are expecting to make savings through standardised consumables and a reduction in number of devices” says Lock.

“It has made life in the IT department a lot easier as we are not installing machines right, left and centre. All the devices are set up the same, staff can go to any site and print straightaway. Also there’s no scanning software involved because it’s all done through the machine.”

The company’s site users are much happier with the new printing arrangements. “The machines are simple to use and we’ve had positive feedback so far,” he adds.

SDC has bought this main batch of OKI MFPs outright but Lock continues to have a close relationship with both Abacus and OKI. “If we do have any issues, we can usually fix it ourselves but if we ever need to we can go straight to OKI’s second level IT support, we don’t have to jump through hoops all the time.”

“We have been impressed by the quality, speed and overall performance of the OKI smart printers,” concludes Lock.

RINNAI GOES SOLO FOR CONTINUOUS FLOW WITH A STORE…

Snickers Workwear – Work Together With You For...