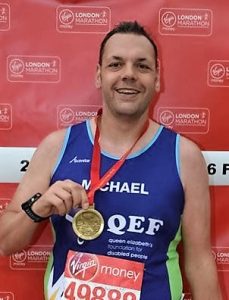 Michael Gallucci at the finish of the 2016 London Marathon

A chartered surveyor and qualified mediator from Watford, Michael is managing director of consultancy MPG, and aims to raise £1,750 for the Queen Elizabeth’s Foundation for Disabled People.

Last year, he raised a similar amount for the same charity, which supports people with disabilities to gain independence and achieve their goals.

Despite pressure of work, Michael hopes his training will be enough to see him get close to last year’s time of four hours and 47 minutes. He proved his fitness in February, completing the Dubai Half Ironman triathlon.

On April 22, Michael will be among 40,000 participants in the 38th running of the 26.2-mile event, which this year for the first time, will see the Queen presiding as the official starter.