Entering an Era of Elegance

Giving the Moderne a contemporary edge while maintaining the tenets of iconic 1930’s design has been realised in the redevelopment of a prestigious London building.

The automatic circular sliding doors from GEZE UK make quite a statement, providing an entrance which blends seamlessly into the curved and streamlined contours of a building which stands proud, like the prow of a ship, on a site where New Oxford Street and High Holborn meet at an acute angle. 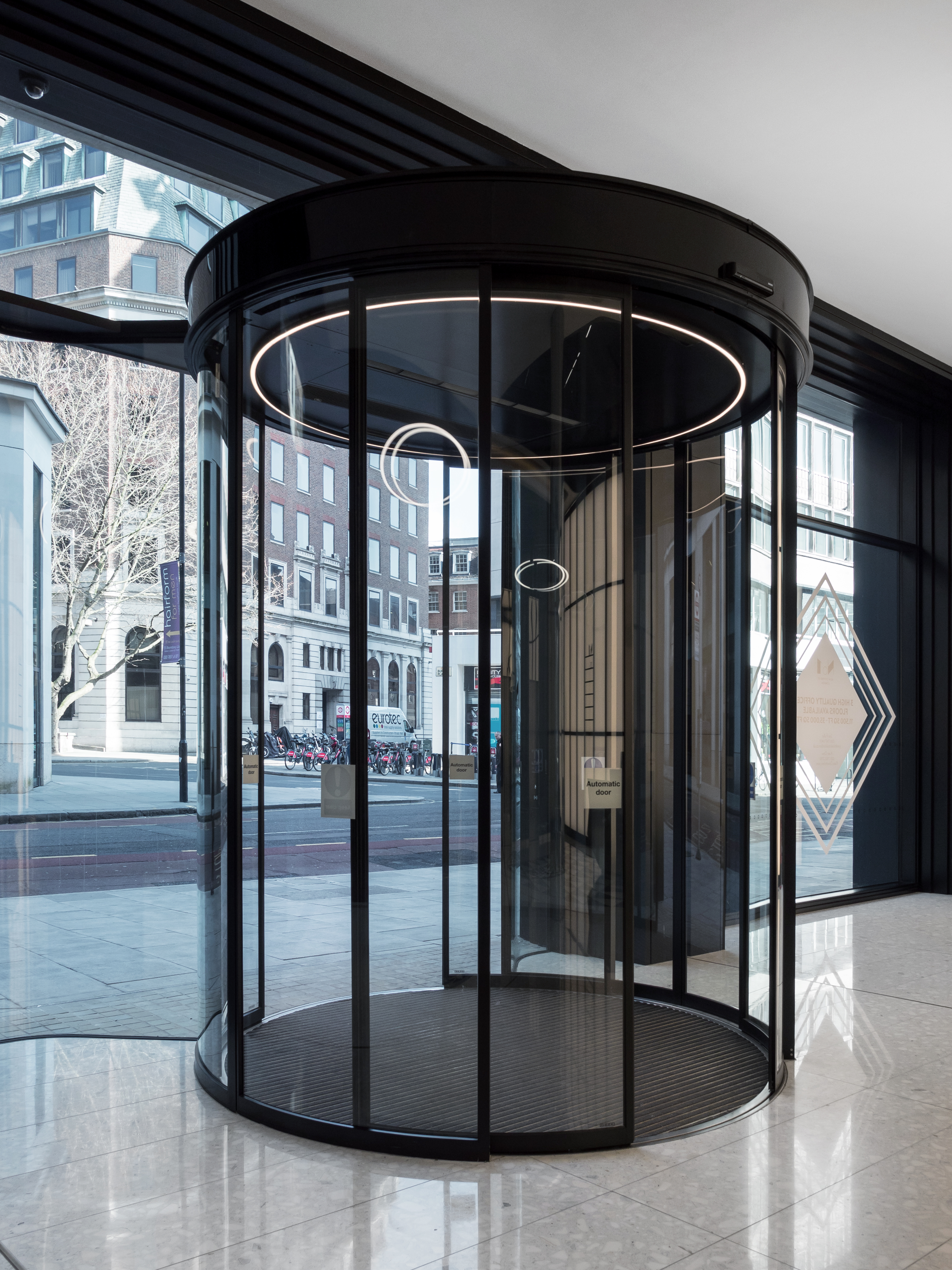 Unlike the sharp geometrics of the similarly placed Flatiron building in New York, No 1 New Oxford Street projects a rounded nose to its edifice, topped off by a modern-faced clock tower designed by its original architect Henry Philip Cart de Lafontaine in 1939.

Its new entrance had to meet this exacting vision. A GEZE Slimdrive SCR was used to provide the light and airy entrance, flanked by curving glass panels to the side which flow into the original columns, and topped with a glazed fanlight overhead. This frontage allowed the sliding doors to be recessed into the entrance, allowing it to seamlessly flow into a new lobby area.

One of the benefits of the Slimdrive SCR is that it combines high performance while remaining discreet. It has a low operator height of just 7 cm and is therefore very unobtrusive. In this case, the Slimdrive SCR was fitted as freestanding entrance – the 360° drive solution is usually incorporated into a building’s facade – but as this entrance was recessed, the installation was adapted to the bespoke requirements of the design.

A circular canopy and black glass wrap was placed over the doorway, blending into the metal framework of the frontage. This included additional detailing by Fleetwood Architectural Aluminium (FAA) which simulated the art deco style.

The canopy determined where the sensors could be fitted, so GEZE UK worked with Fleetwood to ensure that the design brief was met while ensuring that the sensors still performed correctly. GEZE’s GC 365 sensors were used – combining motion and safety detectors which operate the open and close mechanism while alleviating the need for separate sensors. Light rings featured in the lobby area have also been fitted inside the drum of the door – again reflecting the art deco style. And an air curtain was fitted into the installation to blow warm air over the entrance and stop cold air pushing into the building.

Outside, over the top of the impressive double-height entrance is faced with dark green tiles which evoke the style of the modern/deco aesthetic. This has been one of Lafontaine’s original design features but was considered too risqué by the Crown Estate at the time and was never applied.

Orms architects conscientiously researched the creator’s intentions and the effect is truly mesmerizing and so evocative of the time.

The entrance now leads into a distinctive mono-chromatic lobby with terrazzo flooring, fluted glass walls, gold coloured reception desk and a ‘Guggenheim-inspired’ stepped inner atrium that echoes the glamour of a bygone era.  It incorporates a curved wall of back-lit white fluted glass which illuminates the reception with twin pendant lights referencing the geometrical forms of art deco.

The entrance was specified within a detailed brief by Orms Architects, which devised the plans for the £38 million refurbishment of what was created to be an ‘ultra-modern building of imposing appearance’. 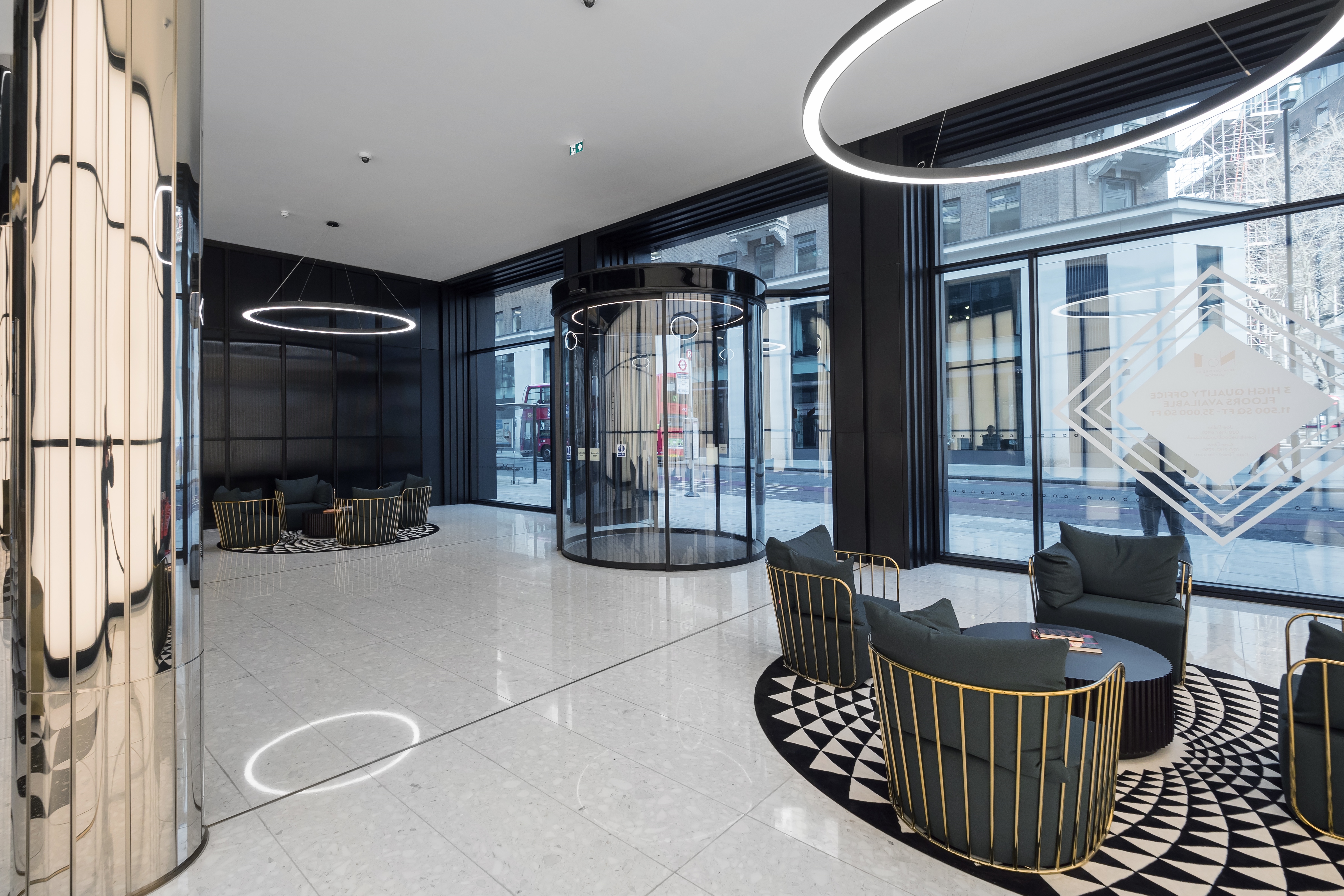 Said Andy Howland, GEZE UK’s Sales and Marketing Director: “This project is an outstanding example of how the refurbishment of an historic building can enhance its facilities while remaining true to the vision of its original architect.

“Orms had very detailed requirements to refit No 1 New Oxford Street to such a high standard in order to future-proof the building to the demands that would be placed upon it. We are delighted that GEZE products were incorporated into this scheme which can rightly take its place among the landmark architecture of the capital.”

Kam Sagoo, Design Manager for Fleetwood Architectural Aluminum said that the level of detailing and installation needed to be very precise.

“GEZE UK was brought early during the design process and numerous meetings were held, with all relevant parties present, to fully understand the design intent, the detailing, coordination, sequencing, logistics and installation.

“Having an established relationship with GEZE UK meant that we could forge ahead with the technical design and realise a viable and compliant solution. The result is a stunning entrance screen which blends the GEZE Slimdrive SCR system effortlessly with the FAA bespoke facade.”

The redevelopment has added 10,000 square feet across nine-storey and incorporated new lifts and bridge decks into the previous courtyard which overlook the new full-height glazed atrium at its heart.

Now available From Rinnai – the HD55I

Former offices in Shoreditch transformed into a beautiful...

Glazing over our historic past