The painting of all four chimneys at Battersea Power is now complete in the exact colour of the originals. 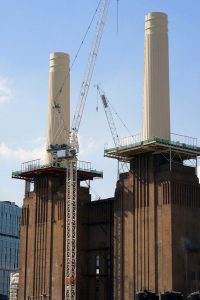 All four of Battersea Power Station’s chimneys had to be painstakingly dismantled and rebuilt, following completion of detailed surveys, very close consultation and engagement with Historic England and the London Borough of Wandsworth.

Rob Tincknell, CEO of Battersea Power Station Development Company, commented: “It is wonderful to see the chimneys, which have become a permanent fixture on the London skyline, freshly painted and the finishing touches applied. This is a great opportunity to thank the BPS team, the specialist contractor and everyone else who was involved in ensuring one of the most important parts of the redevelopment project was successfully completed.”

Cllr Ravi Govindia, leader of Wandsworth Council, said: “An exciting new skyline is developing at Battersea but it is fantastic to see our old friends, the Power Station chimneys, restored to their former glory: a proud landmark for Wandsworth and for London. Rebuilding the chimneys as exact replicas was a key condition of the overall planning application so it’s great the pledge has already come good, ahead of schedule.”

Emily Gee, London Planning Director at Historic England, said: “Historic England welcomes this final stage of the rebuilding of the chimneys, ensuring that the Power Station will retain its landmark status along this evolving part of London’s skyline.”