MPs could be forced to move out of the Houses of Parliament for six years while the buildings undergo major renovations.

The Palace of Westminster faces an ‘impending crisis’ and is at risk of a ‘catastrophic event’, MPs and peers have warned. 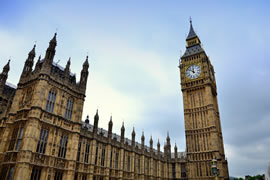 A parliamentary committee is recommending that politicians and peers move into temporary accommodation in the Department of Health and the Queen Elizabeth II Conference Centre.

The Joint Committee on the Palace of Westminster warned that the decision should not be delayed any further, and that work should begin in 2023.

‘The Palace of Westminster, a masterpiece of Victorian and medieval architecture and engineering, faces an impending crisis which we cannot responsibly ignore,’ their report said.

‘It is impossible to say when this will happen, but there is a substantial and growing risk of either a single, catastrophic event, such as a major fire, or a succession of incremental failures in essential systems which would lead to Parliament no longer being able to occupy the Palace.’