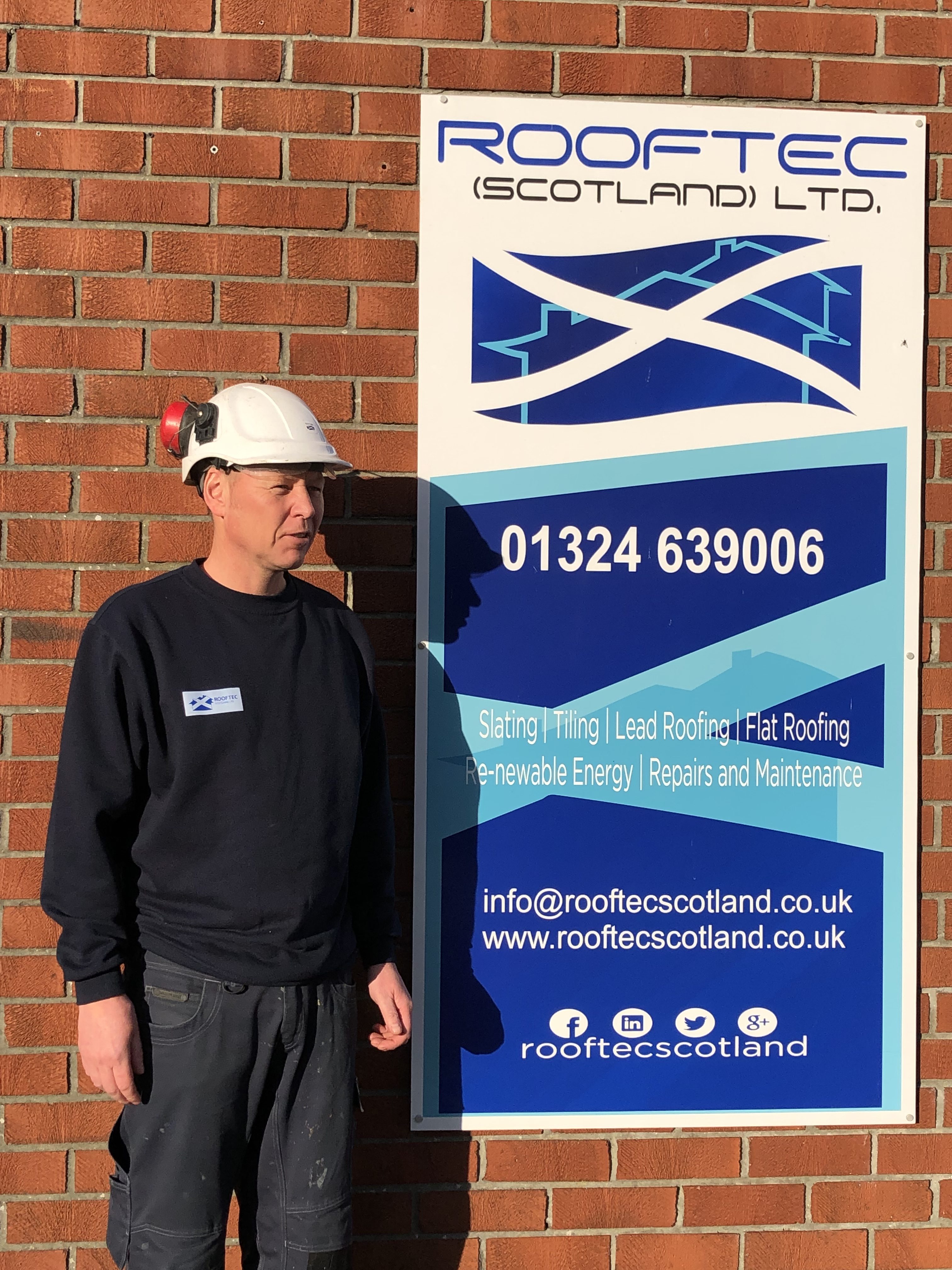 A Falkirk roofer has been hailed as a ‘Local Hero’ for his commitment to raising the standards of the roofing industry by supporting new and young talent.

Mark Cattanach of Rooftec Scotland was nominated in the National Federation of Roofing Contractors’ 2018 UK Roofing Awards, sponsored by SIG Roofing, for his dedication to keeping the trade alive by never sacrificing quality for profit.

When he started Rooftec Scotland more than 10 years ago, Mark was fed up with the “cowboy” nature of some roofers and was determined to build a business that gives customers exactly what they pay for, without cutting any corners.

Mark’s wife, Nicola, who put him forward for the award said: “He wanted to grow the business on a sound moral ethos of getting the job done right. With so many cowboys out there, it has always been important to Mark that he never allows the opportunity for profit to obscure his commitment to doing the best job possible.”

Aware of the current lack of skilled craftsmen available in keeping traditional slating alive, Mark has been dedicated to promoting the trade to young people in order to close the skills gap – to great success.

Mark said: “It’s great to be recognised in this nomination for the work we’ve been putting in to getting young people into careers in roofing. It has certainly been difficult at times, but it finally seems to be working and the kids are starting to pay attention.”

For a number of years, Rooftec Scotland has been involved in outreach programmes designed to encourage young people into the industry. As representatives of the NFRC in the Forth Valley area, Mark and his staff, including apprentices, dedicate two to three days at a time to attend the many events organised by the Scottish Traditional Building Forum, attended by local school children.

Mark said: “These events are great because the pupils can engage directly with people of the same age, who can give first-hand accounts of life as an apprentice. It shows them the wide array of careers available to them in the industry and means they can ask questions to people who will be able to give them an honest answer.”

His passion for developing young people is already paying dividends with Rooftec’s own apprentice, Connor Liddell, recently being awarded NFRC Scotland’s Apprentice of the Year 2018. Through Mark’s mentorship Connor has not only excelled within his postition he is following in the firm’s footsteps by giving back and passing on his experiences to the next generation of roofers.

In 2016, Forth Valley Chamber of Commerce approached local companies with the opportunity to become a board member for its Developing the Young Workforce (DYW) regional group. Rooftec took on the role as it was an opportunity to open up a channel of communication between schools and businesses.

He said: “For a number of years we could see how the young workforce is instrumental in closing the skills gap but we were getting frustrated because we were unable to reach them. We tried to engage with schools but the uptake was quite poor.

“The DYW has changed this and opened up some fantastic partnership opportunities, some of which we are thrilled to have secured.”

In April 2017, by arrangement of the DYW, Mark met with a pastoral teacher at Falkirk High school, who wanted to inspire a group of disengaged fourth years who were ready to walk out the door as soon as their final exam was over.

“I could totally relate to that, as it had been me in exactly the same position, at the same school, many years before. I remember what it’s like to not feel invested in your future because you don’t know which way to turn. I think it’s so important to show kids what’s available to them.”

Mark and Nicola gave a 45-minute talk in which he spoke to the kids about the many advantages of pursuing a career in the roofing industry. One boy was so enthused by Mark’s talk that he became the first modern apprentice to be employed by Rooftec as a direct result of DWY Forth Valley’s efforts.

Mark continued: “Even after just a few weeks in, he was amazing everyone with his enthusiasm and has been out promoting apprenticeships and careers in construction at industry events. This is what it’s all about: showing kids there’s something out there for them, then they’ll do the rest for you!”

Finally, to further support local schools Mark has adopted a “Roofing in the Classroom” lesson plan, which has been piloted with five local schools. The initiative was supported by Historic Environment Scotland with a £5,000 grant to launch it and Mark matched this to deliver the sessions.

The annual National Federation of Roofing Contractors UK Roofing Awards recognises the best of the best in the roofing sector.  As the awards’ headline sponsor, SIG Roofing was also pleased to support the Local Hero awards as a way of acknowledging outstanding roofing contractors who go the extra mile for their local community and are so often unsung heroes.