The Kawneer systems were specified by architects AHR for client TfGM (Transport for Greater Manchester) for the redevelopment which was designed to cater better for existing and future passengers in terms of accessibility, safety and security while retaining the valuable heritage of the original facility.

The 19th Century rail station buildings and a substantial proportion of the platform canopy ironwork were retained, enhanced and brought back into use. The urban realm around a listed clock was also designed to showcase this unique piece of architectural heritage. 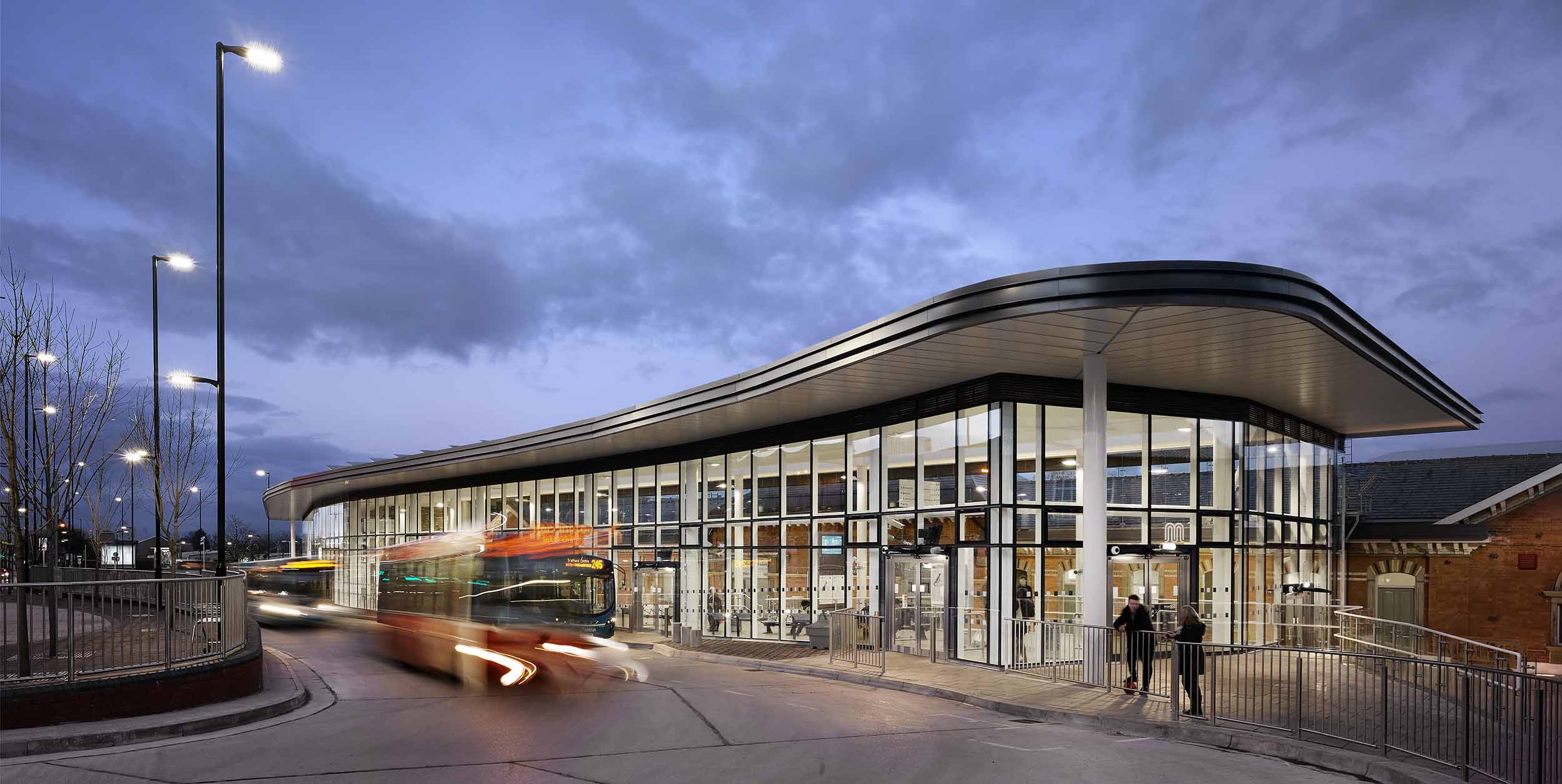 The scheme included the replacement of a 134-year-old bridge connecting the four rail platforms. A new 45-tonne pre-fabricated steel bridge was lifted into place in a single evening to minimise disruption to the travelling public. This significantly improves accessibility between bus, train and tram services.

The glass and steel structure has become something of a destination in itself, the long, curved façade featuring doors accessing a series of uncomplicated drive in/drive out bus bays.

The bus station is the heart of the new building and this includes the spacious concourse, featuring Kawneer’s curtain walling, which links the bus bays to the historic booking hall and new footbridge to the metro and rail services.

From the outside it is possible to clearly see the red brick and stone façade of the station that was for so long hidden behind rows of bus stop platforms and islands.

The concourse roof featuring 50 solar panels is supported by two rows of steel columns and cantilevered back from the façade towards the historic buildings, while lightweight ETFE rooflights run along its length, enabling daylight to flood down without extensive supporting structure. The rear row of columns stands out from the historic station façade to avoid diluting its aesthetic qualities.

Glass fins are suspended from the back edge of the higher concourse roof, descending to the front edge of the Victorian roof lower down. The roof is finished in standing seam, plastered internally in white to reflect light.

Within the building, a separate brick enclosure houses travel facilities, a baby changing area, toilets and staff offices, and on the first floor, access to plant. A new “Cycle Hub” enables cyclists to securely park their bikes under full cover, with constant CCTV coverage and swipe-card entry.

The Kawneer systems were installed by approved specialist sub-contractor SG Aluminium whose managing director Peter Taylor said: “Initially the design was for a total glass-bolted system but cost was paramount and Kawneer fitted the bill with the AA®100 SSG giving a similar appearance from the outside.

“The minimum of profiles internally, with slim 50mm sightlines, also kept the architect happy so all parties were happy with the cost and the solution.”

The build was completed in three phases over two years as it took place around a fully working interchange on a fairly constrained site while keeping all three transport modes running. Perhaps the most noticeable aspect of this was the installation of the new footbridge over four platforms.

This was craned into place in two large segments during a single possession or closure of the railway lines. So it had to fit first time, with each section weighing more than 20 tonnes.

During the staffed consultation exhibitions one attendee was heard to say: “People like buildings with character as well as buildings that are fit for purpose.” Altrincham Interchange delivers both aspects in buckets.

Doors fit for a new world!

Guttering- A property’s first line of defence against...