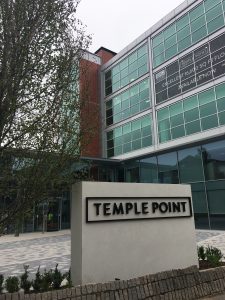 The four-storey building in set within Bristol’s prime Temple Quarter area, which is seen as one of the largest urban regeneration projects in the UK. The area is set to be transformed by the University of Bristol’s plans for a £300m campus near Bristol Temple Meads Station, as well as the development of the road and bus travel network. 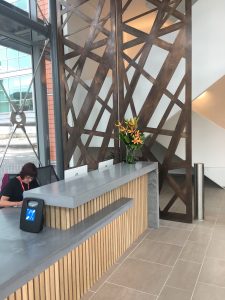 Award-winning architects Stride Treglown has created a scheme with modern workspaces to meet demand from occupiers looking for the best environment for their staff. The building will benefit from an extended contemporary reception area with concierge services, dedicated cycle storage with showers and a changing facility, as well as generous car parking. New LED lighting, new air conditioning and metal ceiling tiles have been installed throughout.

Network Rail, which is already based at Temple Point, has recently decided to take 25,000 sq ft in a letting agreement with the landlord Legal & General, brokered by JLL and Howlings Hodgson.

Mark Russell, Senior Fund Manager of the Managed Fund, commented: “The major refurbishment will create a bold new destination in the centre of Bristol. The building aims to create a new standard of office space in an area where demand currently outstrips supply. The city has a healthy demand dynamic and benefits from a growing and educated population., as well as strong employment prospects with a number of blue chips companies such as PwC, Osborne Clarke, Burges Salmon and RBS located close by.”

Hannah Waterhouse, director at JLL in Bristol, said: “The significant refurbishment project is in a part of the city that looks set to be a game-changing area in the coming years as redevelopment plans forge ahead. Temple Point is a major office refurbishment that will be a key piece of the jigsaw in the area’s regeneration.”

“The scheme comes at a time when office space is at an all-time low with only 550,000 sq ft currently available in the city centre. Demand is high from existing occupiers as well as those moving into the city from other regions including London for whom Bristol’s strong talent pool and competitive rents are undoubtedly a draw. We’ve already seen plenty of interest from a range of types of occupiers in Temple Point.”

Temple Point benefits from excellent transport links with Bristol Temple Meads train station three minutes away, and the M4 and M5 motorways close by. Bristol Airport is just eight miles to the south.

ENGIE secures an additional £2.8m work with Your...