Humans of Construction at London Build 2019
This November will see London Build once again take over the Olympia London, bringing together over 25,000 construction professionals across two days for the largest built environment show for London.

This incredible event will also host the largest ever meeting of women in construction in the UK;  the launch of the world’s first-ever LinkedIn Networking Lounge;  and an attempt to break the world record for the most Movember Moustaches at a single event!

Each photograph will feature an individual from a wide array of fascinating backgrounds in the industry, from CEO’s to architects, pioneers to students and future leaders.
Who will be featured?

Elvin Box (Chair London Constructing Excellence & Movember Community Ambassador) is one of the inspirational professionals to be featured in the exhibition.

Having been diagnosed and treated for prostate cancer in 2016, Elvin found himself becoming more involved in men’s health charities and well-being initiatives.

“Recovering from prostate cancer led me to seek counselling to overcome the ‘Dog Days of Depression’,” Elvin explains. “All too often, the victims of this male-centric cancer endure life-changing side effects.”

35 years prior to his diagnosis, Elvin was a construction manager in Knightsbridge when he witnessed a young colleague fall six floors through a hoist tower, tragically passing away. The construction sector’s health and safety practice at the time was notably poor, and support and assistance were not offered to those impacted by incidents such as this one. Without that necessary support, Elvin found that the event had a severe effect on his mental health, and he experienced a deep depression.

The effect that both of these experiences had on Elvin’s mental health led to his affiliation with men’s health charities, moving him to campaign for change within the sector

“The construction sector’s performance in the realm of health, safety and well-being has improved beyond all recognition, from the battlefield that existed over 35 years ago. However, we are still one of the most dangerous and unhealthy industries to work in” Elvin told London Build.

With his passion and dedication, he takes every opportunity to help the industry to be at the cutting edge of health, safety and well-being.

Beneath Elvin’s photograph will sit his story, amongst 999 similarly inspirational stories, offering a glimpse into the lives of the humans that make up our industry.

The Humans of Construction exhibition will include LinkedIn QR codes for many of the individuals featured, offering a chance for you to connect with them online. The photography exhibition will be displayed as part of the LinkedIn Networking Lounge at London Build.

In the LinkedIn Networking Lounge, attendees will be able to network whilst using the LinkedIn app on their mobile to scan each others LinkedIn QR codes to connect. There will be a timetable of Speed Networking events as well as various other networking activities and entertainment.

If you’re heading to London Build this November, be sure to visit what promises to be an inspiring and genuinely beautiful art piece – taking the seemingly ordinary and making it extraordinary. A wall adorned with the faces that make our industry what it is.

You can nominate yourself, or any astonishing individuals within the industry, to be featured in the photography exhibition. 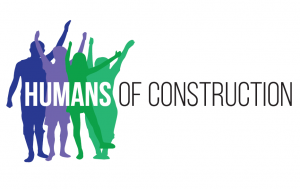