The Government is set to award Sir Robert McAlpine the prestigious contract to restore the Big Ben tower at the Palace of Westminster despite the on-going row over plans to silence the famous bell for four years.

McAlpine’s special projects division picked up the £3.5m enabling works contract around nine months ago and is set to be confirmed for the overall Elizabeth House when MPs return in early September.

The bell of the famous clock will fall silent for four years to protect workers’ hearing during the restoration of the 96m tall Elizabeth Tower, the Great Clock and the Great Bell.

Repairs to the clock and bell would have silenced Big Ben’s chimes for at least two years anyway.

The Health and Safety Executive has liaised with both the client and the principal contractor and said there was broad agreement that the noise risks associated with working around the clock bells were highly significant.

While the tower itself is structurally sound and does not require works to improve its stability, other works are now a matter of urgency.

Cracks have developed in the masonry, the cast iron work on the roof and belfry is corroding, and leaks have caused damage internally.

Condensation problems have led to problems with damp, cracked plasterwork and rust. Corrosion to the bell frame has caused one of the feet supporting the quarter bells and Big Ben to split. Stonework damage is present at high levels and the famous Ayrton Light, which tops the Tower and shines to indicate that Parliament is sitting, needs to be fully dismantled and restored. 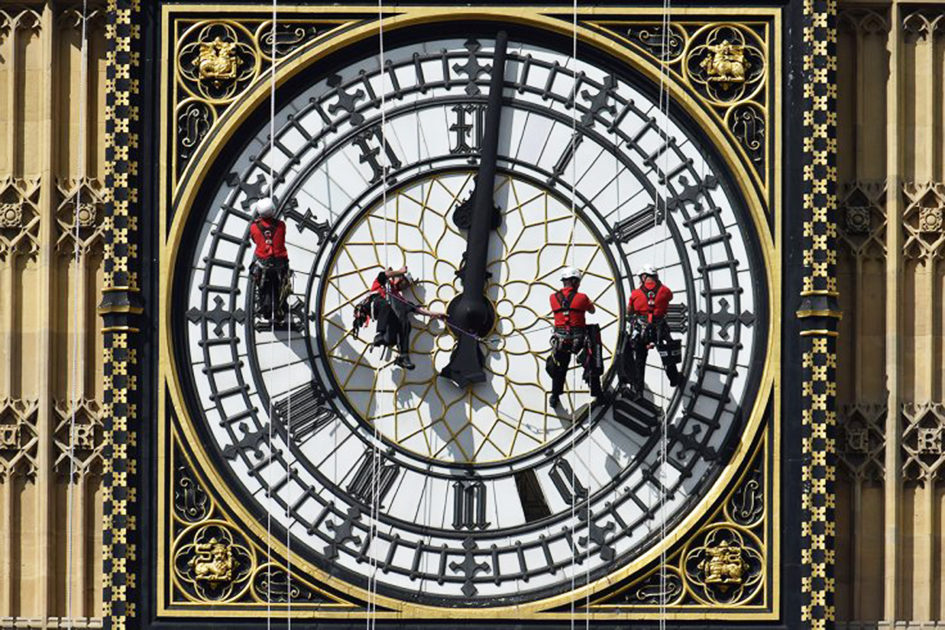 One of the aims of the project is to conserve significant elements of the Tower, as designed by architects Charles Barry and Augustus Welby Pugin.

The existing black and gold colouring around the clock dials was applied in the 1980s. Parliament’s team of conservation architects are currently analysing the original paint used to decorate the surrounding areas to each clock dial. Once a clear picture of the early colour schemes has been built up, the stonework will be repainted to reflect, as far as possible, Pugin’s original design.

The clock hands were last removed in 1984, and will now benefit from removal and refurbishment again. Many of the 312 pieces of pot opal glass used to make up each clock face need to be renewed as a number have cracked due to years of exposure. In addition, the cast iron frameworks which hold the glass in place have corroded and need extensive repairs.

In addition to the conservation work, work will be carried out to improve and upgrade health and safety and fire prevention for staff and visitors within the Tower, in line with Regulatory Reform Order 2005.

A lift will also be fitted into one of the existing ventilation shafts. To improve the Tower’s energy efficiency, mechanical and electrical services will be renewed and updated and the lights illuminating the clock dials and the belfry will be replaced with low energy LEDs.

Welcome to The Hub – Mitsubishi Electric