It was once a building where juries deliberated and judges passed sentences, the Police investigated crimes and placed criminals under arrest. However, this Grade II Listed Magistrates Court and Police Station on Old Street, has been given a fresh lease of life and now stands as a sumptuous 5* boutique hotel. 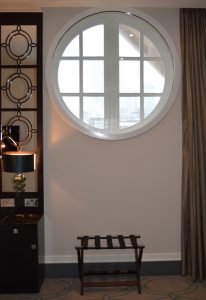 Originally built in 1903 by John Butler, Old Street Courthouse was a formidable building containing two courthouses and offices. The buildings were in use from 1903 until 1996 and the police station was operational until 2008.

To change this Grade II Listed building from a Courthouse to a hotel, careful consideration had to be given to improve the thermal performance as well as mitigating the ingress of noise, to create a warm and peaceful haven for guests.

As the building is Listed, the original primary windows could not be removed; so Selectaglaze was approached by the principle contractor McAleer and Rushe to provide a solution for the vast range of different style windows. 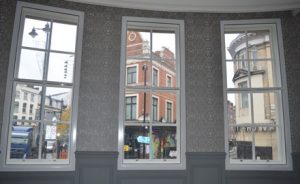 A total of 106 units were installed including curved, raked, casement doors and a beautiful double floor height feature window which was 5.287m high and 2.045m in width. The circular windows on the top floor required particular care and a bespoke fixing method for installation had to be created to meet the client’s requirements.

Secondary glazing is an independent window installed on the room side of a building, which reduces noise ingress creating a quieter environment; a reduction of 45dB is achievable. As well as noise reduction it can also virtually eliminate draughts and aids in retaining the heat of a building, reducing heat loss by up to 50%. 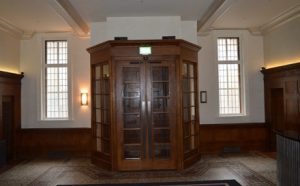 As it is a fully reversible adaptation, it is often the only solution to enhance poor performing primary windows in Listed properties and is accepted by most heritage bodies.

With great attention to detail paid to all aspects of the design and build, Old Street Hotel is currently on target to achieve a ‘BREEAM Very Good’ rating.

Selectaglaze is the specialist in the design, manufacture and installation of secondary glazing, with fifty years’ experience and has held the Royal Warrant since 2004. It has a wealth of experience working on all building types.