Proud of access to iconic structure at the heart of Westminster

The Big Ben conservation project reached a major milestone when the final piece of the 98 metre high scaffolding was slotted into place.  The achievement was recently marked by a rooftop ‘topping out’ ceremony, a centuries-old ritual celebrating the highest point of building work being completed. 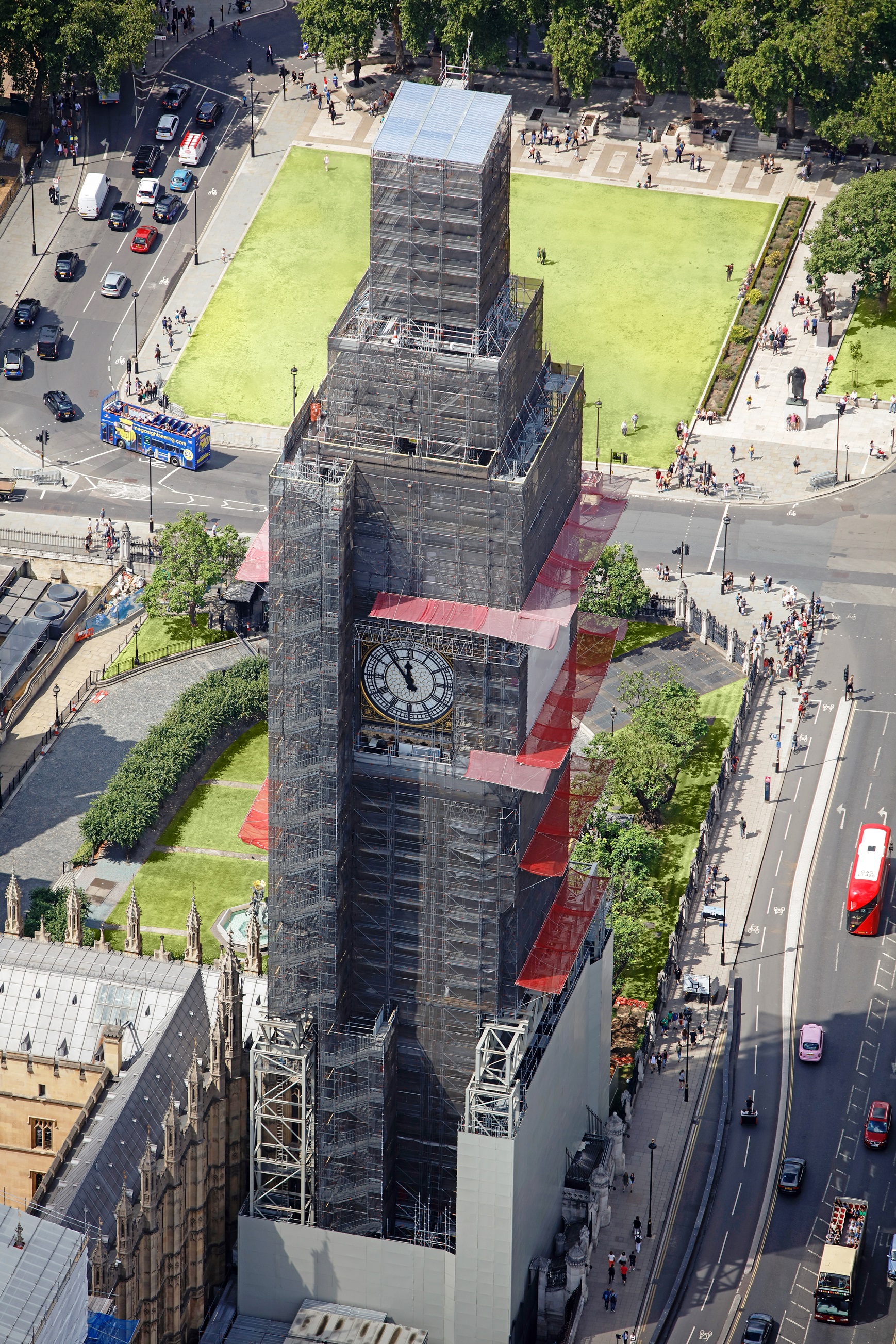 The ceremony at the top of the Queen Elizabeth Tower – popularly known as Big Ben – was preceded by traditional bagpipe music and an evergreen bough was attached to the scaffolding by the building and civil engineering company delivering the conservation project, Sir Robert McAlpine Special Projects Ltd.  The Director General of the House of Commons, Ian Ailles, thanked the team of experts managing the huge task of restoring the Grade I listed building to its former glory.

A UNESCO World Heritage site, an international symbol of democracy, and a genuine beacon of the UK that is recognised worldwide – the restoration of the Queen Elizabeth Tower is high profile in every sense.  With some 23,500 Layher Allround® components utilised to create 47 working lifts, all underneath a temporary roof structure, it is also a project of which Layher is enormously proud to have been involved with the engineering and scaffold access system for the four-year restoration programme.

The company’s Allround® scaffolding, HD aluminium beams, public stair access, Lightweight cassette roof and Protect panels are the key systems that have been supplied and expertly installed by scaffolding contractor, PHD Modular Access Services Ltd. (Heritage Division) – appointed by main contractor, Sir Robert McAlpine Special Projects – and their team of dedicated scaffolders.  Scaffold access to the faces of the tower and the temporary roof installation have now been completed, and as Danny Dwyer, Managing Director of PHD, explains, the project has had clear objectives and challenges that have been addressed by the joint bespoke design –

“All four faces of the Queen Elizabeth Tower have been scaffolded to provide access to the stonework for specialist repairs, importantly, without tying to the fabric of the building itself,” he says.  “Because the layout of the adjacent structures meant only one face could be scaffolded fully to ground level, structural steel sections designed and supplied by Sir Robert McAlpine were built up from the ground by PHD to span the adjacent building and roof areas.  From this solid base,” he adds, “further scaffold was punched upwards to the full 98 metre height of the tower and ultimately to provide support for the temporary roof at the top.” 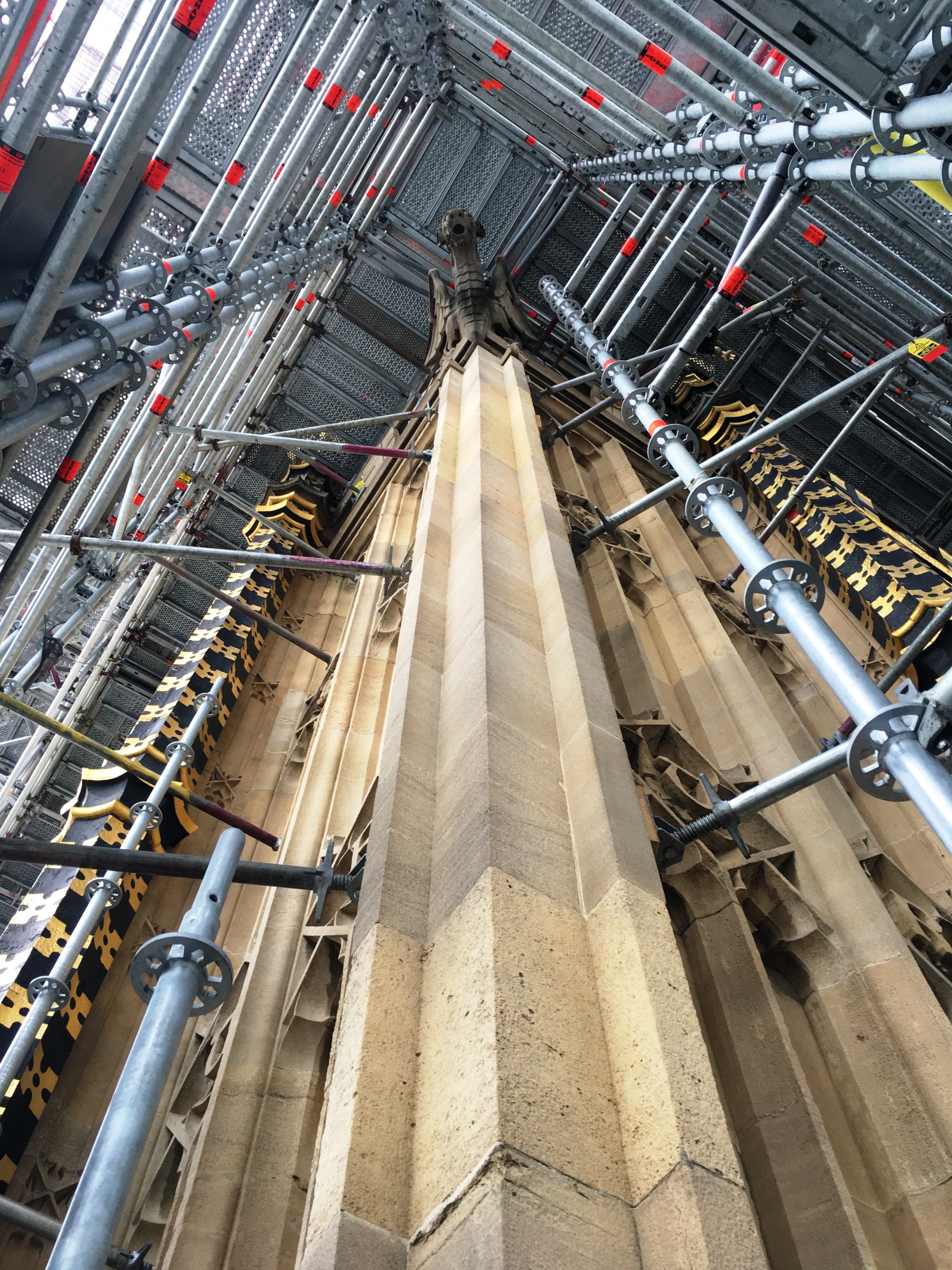 The Layher Allround®, including HD aluminium beams installed above and below the four clock faces to enable clear access, is now providing unobstructed walkways at every lift, with safe access via Layher staircases throughout.  The lightweight structure has also enabled PHD to effectively ‘embrace’ the tower with the scaffold to ensure its stability – each façade consists of a series of compression ties against the stonework to eliminate the need for physically tying into and damaging the building.

Particular challenges for the scaffold were to provide gap free access, allow decorative elements of the clock tower to pass through the platforms, yet be protected from damage, and be as close to the working face of the building as possible for the various trades that will now work off the structure.  The scaffold also accommodates a bespoke passenger and goods lift to move both personnel and equipment to the full height of the tower structure.

Stonework and cast iron roof conservation, together with improvements to make the structure more environmentally friendly, alongside interior repairs and re-decoration, with a focus on fire protection and safety, are all key elements of the project.  The recent ‘topping out’ ceremony has marked the completion of the scaffold access installation – finished on time in just over one year – and has now cleared the way for the specialist stonemasons and refurbishment experts to begin their work. 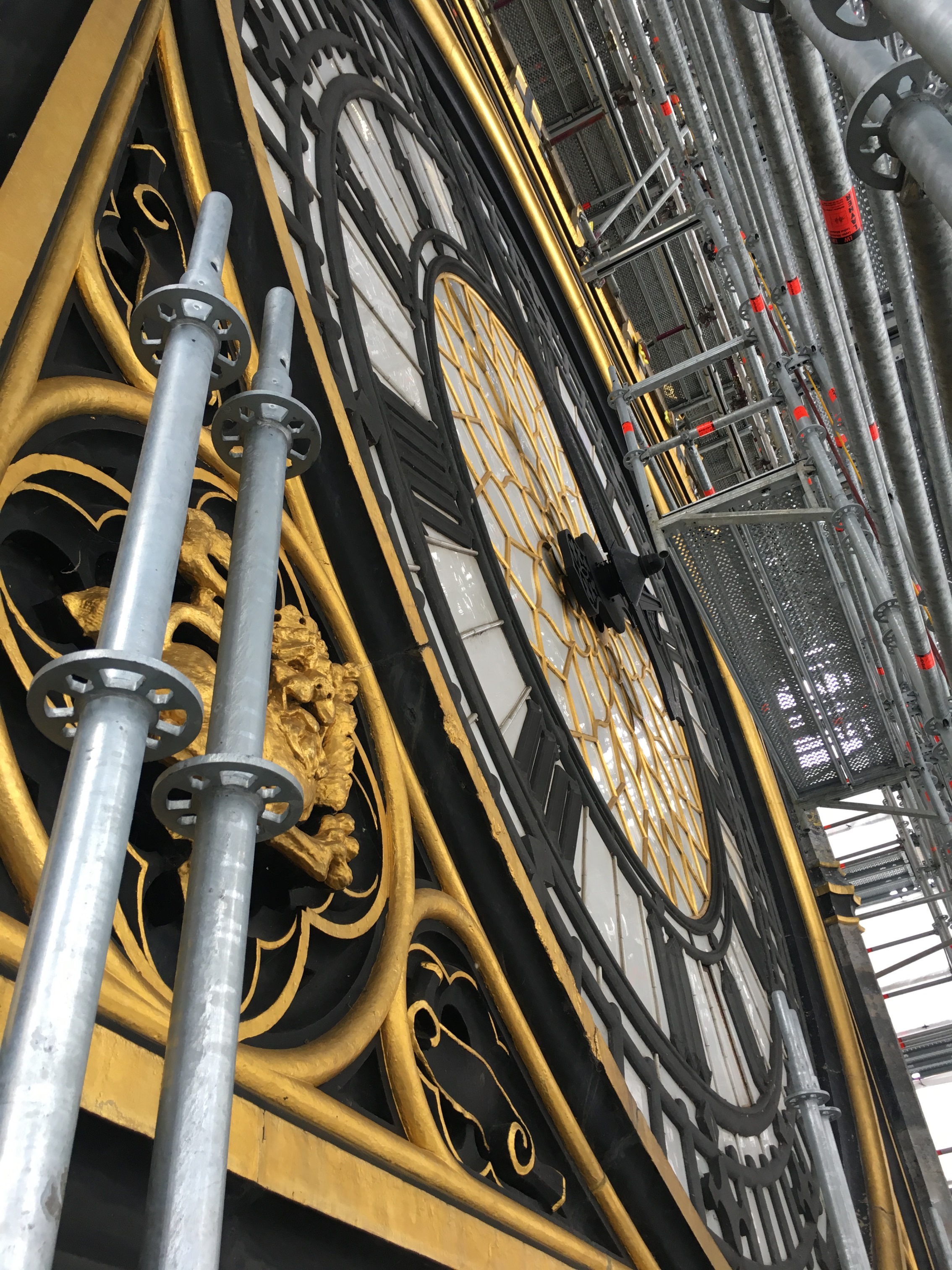 Scheduled for completion in 2021, and with one of the iconic clock faces visible throughout the project to help maintain the identity that the famous tower has created over some 159 years, this is an important programme in every sense.  Layher’s equipment – some 800 tonnes has been used – and PHD’s scaffolding expertise along with Sir Robert McAlpine have come together at the heart of a project which, it may be argued, could neither be more important nor more challenging.

“As one of Britain’s most iconic buildings, it is a privilege to be entrusted with the preservation of the Elizabeth Tower,” he says.  “We are proud to help keep this landmark a centrepiece of our country’s rich heritage through our skills and technical excellence and celebrate this milestone in the conservation work.”