A fire that engulfed a multi-storey in King’s Dock, Liverpool, destroying over 1,600 vehicles, could have been stopped if sprinklers had been fitted in the building, the area’s Chief Fire Officer has claimed.

The seven floor multi-storey suffered extensive damage when it was engulfed by a 1,000C blaze, thought to have been started by the engine of an old Land Rover. Despite fire crews attending within eight minutes of the alarm, the flames spread so quickly they were not able to control the blaze.

Crews would have had a “much better” chance of stopping the fire if sprinkler had been installed, said Dan Stephens, of Merseyside Fire and Rescue Service (MFRS). 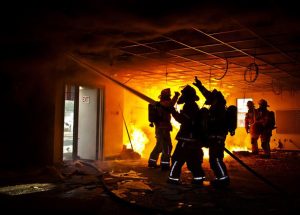 “One thing is for certain – had the building been sprinklered there is every chance that would have suppressed the fire sufficiently then for us to be able to go in and extinguish the fire without it spreading in the way that it did,” commented Mr Stephens. “I believe a sprinkler system would certainly have suppressed the fire, it would definitely have limited the spread and given us a much better opportunity to put the fire out before it spread to the extent it did.”

Liverpool’s Mayor Joe Anderson said the Council will take advice on any “lessons to be learned” over the fire at the local authority-owned building, which was constructed in 2008.

In total, 12 fire engines were deployed to tackle the blaze, with crews from Greater Manchester and Lancashire assisting.

“Whilst thankfully no lives have been lost, there are many that will be affected by this fire,” commented Iain Cox, Chairman of the Business Sprinkler Alliance (BSA). “There will also be the significant cost of the insurance claims for the 1,600 lost vehicles and their belongings. In addition whilst the structure is not in danger of collapse, it was unlikely it can be saved and will require demolition and rebuild. The cost and environmental impact of this will be significant.”

“Sprinklers are a proven method of controlling fires. They allow fire crews the time to safely gain access and extinguish fire and we welcome their consideration as a way of ensuring that properties of all types are adequately protected.”

For more information about the BSA visit the  www.business-sprinkler-alliance.org

Experience a Purple Patch with Vicaima