Temple Works flax mill, which once boasted the biggest room in the world, has been put up for auction with no reserve after years of neglect.

The billionaire owners of the Telegraph have been accused of “washing their hands” of one of the UK’s most important and unusual industrial buildings after leaving it to rot for more than a decade and then putting it up for auction for a pound.

Temple Works is a Grade I-listed former flax mill in Leeds which boasts a 0.8 hectare (2 acre) factory floor which was once the largest room in the world. It also saw the installation of the first ever hydraulic lift, used to transport sheep up to the roof for grazing. The sheep were part of a revolutionary rainwater collection system used to make steam to spin flax into yarn.

The building, once described by the Yorkshire Post as looking “like a stately home for a pharaoh”, has been owned since 2004 by the secretive Barclay family, who bought the Telegraph media group in 2004. 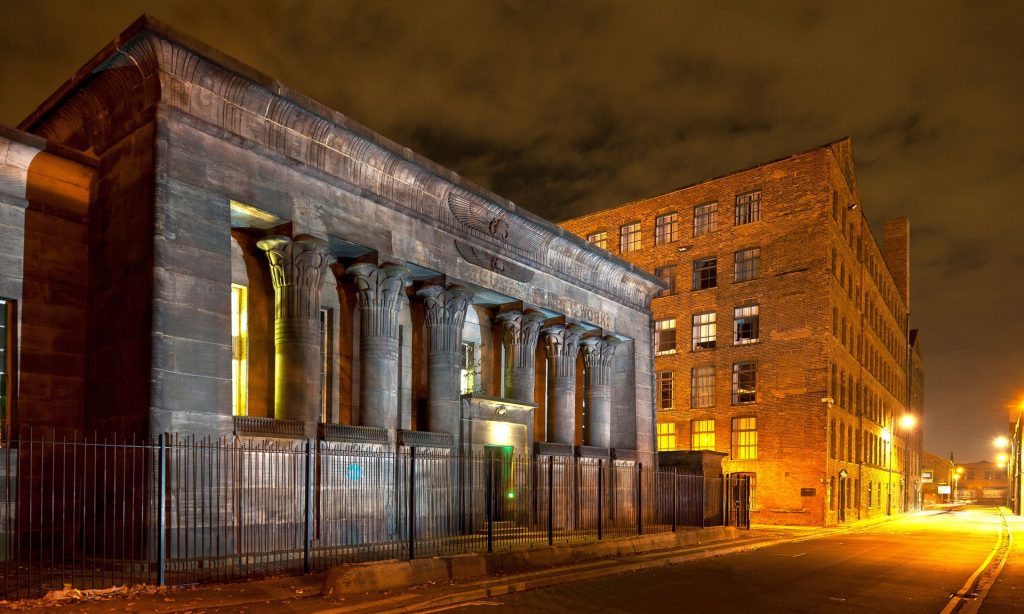 Built in 1836, it was modelled on the Temple of Horus at Edfu, on the banks of the Nile, reflecting the interest in Egyptology of John Marshall, the founder of the Leeds flax industry.

According to Historic England, the building represents the zenith of the Marshall Mills flax business in Leeds and had acquired a legendary reputation within a few years of its construction. The Egyptian facade, featuring elaborate giant columns topped with lotus capitals and hieroglyphic-filled coving, was designed by the Egyptologist Joseph Bonomi, brother of the architect Ignatius Bonomi. Egypt had an important flax industry in the ancient world.

The 10,948 sq metre (117,843 sq ft) mill featured among the Victorian Society’s 10 most endangered buildings six years ago, and is in a poor state of repair after a partial collapse in 2008. It is due to go up for auction on 7 December after Burberry cancelled £50m plans to use the site as a factory-cum-showroom.

The complex was last used commercially in 2004, when it was a mail-order warehouse for the now defunct Kays catalogue. The Barclays inherited it in 2004 when they bought Kays, having already acquired another catalogue company, Littlewoods, in 2002.

For several years, until February 2016, the building was used as a cultural hub called Temple.Works.Leeds as plans developed to turn the space into a northern rival to the Tate Modern. But with renovation costs estimated at upwards of £20m, the right buyer never emerged, and a local developer was outbid by Burberry on an option to develop the site.

Burberry put the project on hold in 2016 amid Brexit uncertainty and eventually pulled out of the deal in July.

The property will be auctioned next month with no reserve, meaning it will be sold to the highest bidder on the day regardless of the size of the bid.

Whoever buys the site will not only have to carry out major repairs but will have to figure out what to do with the enormous old factory floor. Lit by dozens of beautiful domed skylights, the masonry roof is only just held up by rotting hollow pipes which acted both as columns and to help to collect rainwater to make steam.

Heritage campaigners fear that the auction process will encourage buyers who may underestimate the scale and cost of renovation.

“We are disappointed that the owners have chosen to dispose of the building by auction. It feels like they are washing their hands of what they must see as a liability,” said Martin Hamilton, the director of Leeds Civic Trust.

“There is now a real risk that a naive investor will purchase the building without the resources to spend on refurbishment – possibly upwards of £20m, leading to more years of neglect, planning and legal wrangles and quite possibly the final nail in the coffin for this building.

“We would appeal to the owners to withdraw the building from the auction and to work with Leeds city council and other interested parties to identify a buyer with the necessary resources to turn the building round, and a use that would be a focus for the wider regeneration of this part of Leeds city centre.”

The council has bought several acres of land around the site which it could offer the right buyer of Temple Works as a sweetener. By 2033, the HS2 railway station should have been built a short walk away.

Martin Farrington, the director of city development, said: “Temple Works is a very significant part of the industrial heritage not just of Leeds but also the UK and the council will work collaboratively with an experienced developer who wants to bring the building back into sustainable use.”

Due: Designing and manufacturing furniture from barrels and used wood