Winn & Coales International Ltd celebrated their 130th Anniversary with a visit from HRH The Duke of York, KG

Winn & Coales International Ltd, specialist ‘Denso’ anti-corrosion and sealing product manufacturers based in West Norwood, London, celebrated their 130th Anniversary with a visit on Wednesday 16th October by HRH The Duke of York. 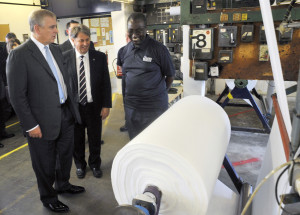 During the visit, His Royal Highness unveiled a commemorative plaque specially commissioned for the occasion and congratulated the company on its success over 130 years of trading due to a combination of innovation, commercial nous and sound manufacturing practices, all resulting in continuous growth both in the UK and worldwide.

Deputy Lord Lieutenant, Major David Hewer followed by presenting the company with a Queen’s Award for Enterprise: International Trade 2013. This achievement was for the second time running as the company had previously gained the very same Queen’s Award in 2010.

Denso’ corrosion prevention and sealing products are well known and used all over the world for the protection of steel and concrete and are also manufactured by subsidiaries in the USA,  Canada, Australia, New Zealand and South Africa. The company’s other well known brands include SeaShield, Protal, Archco-Rigidon, Densostrip and Sylglas.

Composite Decking to Lust After

NEW MAGNUM SPREADER IS READY TO WORK HARD THIS WINTER

The Piece Hall, Halifax: Conserving a Grade I...